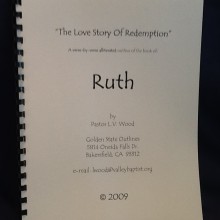 Ruth: “The Love Story Of Redemption.”

An alliterated exegetical outline of the Book of Ruth.

The Romance Of Ruth 30 pgs.

I. Deprivation Led Naomi To Journey To Moab With Her Husband And Unsuspecting Family (1-5) [A Time Of Dreadful Insufficiency]

B. The Father’s Death In Moab (3)
1. Naomi Was Lost Without Her Trusted Spouse (3a) And Elimelech Naomi’s husband died;
2. Naomi Was Left With Her Two Sons (3b) and she was left, and her two sons.